Bias variance tradeoff is one of those terms that a lot of people talk about in data science but few have a proper nuanced understanding of the concept. Let's change that today with this discussion. Before we hit it off with a bias-variance discussion, let's remind ourselves about what we are trying to achieve when we build a predictive model for any problem.

Three things to keep in mind for Bias and Variance in Machine Learning: 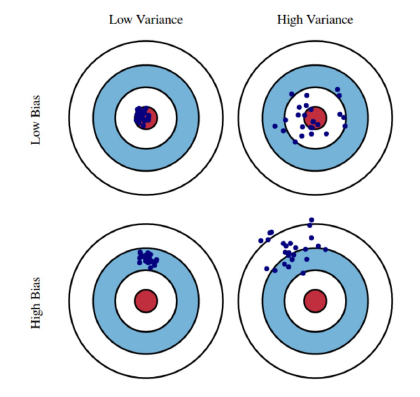 Imagine the centre of the red bulls' eye region is the true mean value of our target random variable which we are trying to predict. Every time we take a sample set of observations and predict the value of this variable we plot a blue dot. We predicted correctly if the blue dot falls inside the red region. Bias is the measure of how far off the predicted blue dots are from the centre of the red region (the true mean). Intuitively bias is a quantification of error. Variance is how scattered are our predictions.

The top left is the ideal condition but it is hard to achieve in practice, and the bottom right is the worst-case scenario which is easy to achieve in practice (usually the starting condition for randomly initialised models). Our goal is to go from the bottom right (high bias high variance) situation to the top left situation (low variance low bias).

But the problem here is: Unfortunately, achieving the lowest variance and lowest bias simultaneously is hard. When we try to decrease one of these parameters (either bias or variance), the other parameter increases.

Now the trade-off here is:

There is a sweet spot somewhere in between which produces the least prediction error in the long run. 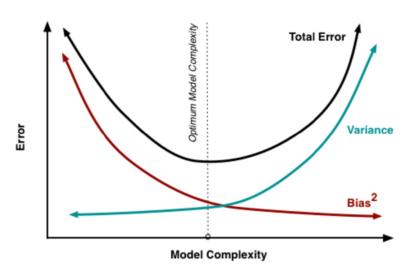 You need to understand that bias-variance tradeoff discussion is done at the algorithm level. It is not specific to any single problem or model.

Let me summarise and reiterate a few of the things that we discussed :

So simpler models make use of very generic patterns and cannot capture very nuanced patterns present in the data. The basic logic here is -

So simpler models are consistent across different data samples, their variance will be low, predictions will be consistent, and they will generalise relatively better. However, this comes at the cost of, predictions not being very accurate: meaning high bias.

More complex models will be capturing nuanced patterns and hence their predictions will tend to be more accurate, hence low bias. However, they will not be relatively consistent with a change in data samples, leading to high variance.

IBM’s reformative vision towards education in Artificial Intelligence and Machine Learning makes it a showstopper in the jungle of byte-sized and macro-level learning paths that is co-developed with thoughts leaders of the industry to ensure that your career takes off with the invincible competency under the right mentorship under IBM academicians.